The Plot to Save Socrates 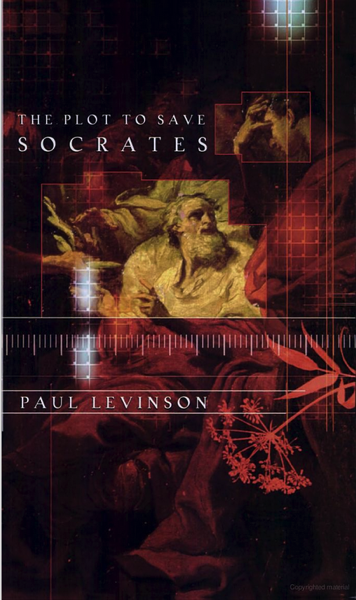 Came across this book when looking for this…

This novel is creating excitement among a circle of people, mostly therapists and philosophers if the book’s Facebook page is anything to go by. It is readable as a whodunit, thought provoking about the nature of the soul in a Jungian way, funny though not exactly LOL, and controversial about the nature of science and research in the humanities. It was published in January and is set to be a cult classic. A sequel is likely and there are rumors about a movie and a HBO T.V. series.

This is a first novel by a hitherto little known New York psychotherapist Wouter Spiegelmens Ph.D. who draws deeply on the experience in his practice. There is no shortage of descriptions of psychotherapy sessions, the book consists of little else. Oh, except for long introspections by the main character and hero Matthew Prendergast. If you are one of his clients, and wondering if your confidentiality has been breached you may take comfort that the title page clarifies in the usual way that this is not about real people living or dead. You may also note a reference in the novel, ‘You’re so vane if you think this book is about you, about you, you’re so vane.’ The book may well draw on the authors life in other ways, while we know little about Spiegelmens we do know that Prendergast and the author practice in the Greenwich Village, they are both in their early fifties and both have been divorced. We know the authors ex-wife is Martha Heathcote brother of the owner of real-estate firm Heathcote Chester and Gracefield. This would explain Spiegelmens’ intimate knowledge of the NYC real-estate scandals in the late 1990s, a time that is often referenced in the book though it is set well after 9/11, as is evidenced by references to OMG!!! Twitter posts, the ubiquity of iPads and clients talking about being unfriended and fraped (look it up).

Prendergast is neurotic in a Woody Allen kind of way, matching the seemingly endless stream of clients that come to his practice. He doubts his own existence as his clients talk of being invisible. He has sexual fantasies that are bizarre but inform him of his counter-transference, and lead him to make insightful and totally ethical responses to the client. For example he has just mentally undressed and chained a seductive young woman to a bed, and then in real life responds ‘You are terrified by too much freedom, you yearn for some constraint.’ she feels very well understood and nodes profusely, leading to more elaborate fantasies in the mind of the therapist. Yes counter-transference is a word you will be quite comfortable with if you even closely resemble one of the book’s enthusiastic followers.

By means of therapy sessions, clinical supervision sessions, and supervision sessions about supervision sessions we become familiar with a network of people who in their own way shed some light on the death of building contractor entrepreneur. Was he killed or is it suicide? Does the dream by a client of a psychotherapist who Prendergast supervises and the philosophy of John Lock hold a key to the answer to that question? The answer is yes. As a reviewer I’m fearful of loosing my credibility to admit that I found that a credible answer.

I’ve given away too much already. I can say, as it is already on the back cover, that this is a novel where learn how a crime is solved as we join a psychotherapist’s journey into the collective unconscious.

Read this book, I doubt the movie will be as good, unless they employ Spiegelmens to approve the script; he has a quirky insight into the nature of reality and consciousness that should not be lost in translation.

A version of this review appeared in print on April 1, 2011, on page C6 of the New York edition with the headline: Underground: Fiction reveals truth.