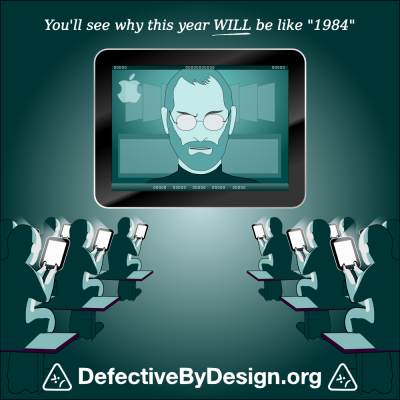 Love that poster. Love that there are groups and people who say these things:

1) You will lose control of your hardware. The corporations imposing DRM systems will be in control of your computer and electronic devices, restricting your actions and monitoring you.

2) You will lose your traditional rights. You will lose the right to sell the music/video/e-books you thought you purchased, and you won’t be able to make private copies or backups or share with family and friends.

3) You will have additional privacy concerns. Your personal viewing/listening/reading habits will be available in the same way that your telephone records now are.

A strong free software movement focused on the principled issues of software freedom — and a strong FSF in particular — will determine what freedoms the next generation of computer users enjoy. At stake is no less than the next generation’s autonomy.

DRM will give Apple and their corporate partners the power to disable features, block competing products (especially free software) censor news, and even delete books, videos, or news stories from users’ computers without notice– using the device’s “always on” network connection.

This past year, we have seen how human rights and democracy protestors can have the technology they use turned against them. By making a computer where every application is under total, centralized control, Apple is endangering freedom to increase profits.

Apple can say they will not abuse this power, but their record of App Store rejections and removals gives us no reason to trust them. The iPad’s unprecedented use of DRM to control all capabilities of a general purpose computer is a dangerous step backward for computing and for media distribution. We demand that Apple remove all DRM from its devices.

The computer in my pocket — Free Software Foundation — working together for free software:

It shocks me that anyone, especially free software advocates, would happily put up with such nonfree computers. I think part of the reason lies in the fact that most users of mobile phones, and even most phone users that care about software freedom and technological autonomy, don’t think of their phones as computers. Thinking of our phones as computers will not solve any of the problems I’ve alluded to. But doing so remains an essential first step toward any solution. Although we must still work to build viable, widely accessible, and compelling free phones, we must first convince both users and developers that this is an important goal. Reminding people that our phones, both free and nonfree, are powerful general-purpose computers remains an important and still largely unfufilled part of this process.

We must find ways to remind ourselves and others of the fact that modern phones are powerful computers with powerful interfaces that are useful for an unimaginable variety of arbitrary applications. We must focus on the fact that these computers have microphones, cameras, and other sensors, and that we trust them with our closest secrets and most sensitive data. We must not forget that, in almost all cases, these computers remain controlled, completely and ultimately, by companies that very few of us trust at all.

I’m not sure how we will accomplish this task. But more of us need to think long, hard, and creatively about this problem. I’ll be calling my phone “my computer” as a first, very personal, step. I have done this over the last week and it has led to some conversations with slightly confused acquaintances. Of course, this doesn’t make my phone any more free. But it does mean I’m talking more about the nonfreeness most of us have put up with too silently.

Bad Apple? I have a question mark in the title… I think the problem is far bigger than Apple. It is worth protesting against Apple and the media companies, and RIAA, MPAA and the administration in Washington, D.C. and all other governments who are out to protect the rich to make them richer… the system stinks.

The whole profit motive means that everything made by corporations is defective by design, everything we use, read, eat, drive, watch is defective by design. Profit is put above form and function. We are not free, nor are the wage slaves that make these things, and the cost to the planet is horrendous as environmentally friendly is not always profit friendly. Even when corporations do the right thing it is because it is more profitable.

How to be yourself, creative, alive, when everything is defective by design?

I will call my phone my computer. And I will say it is full of profit driven DRM. And I drive a car, and buy over-wrapped products. I will use products with values in mind, the complex mix of which ones might be less exploitative than others.