The ambitious comprehensive radical work of Richard Moore.  He starts from his work with software and becomes a something like a marxist.  How come he’s not a Marxist?  His book is called Escaping the Matrix.  The movie too was a great metaphor for the basis / superstructure of society.

Richard’s book on his site, and on Amazon: 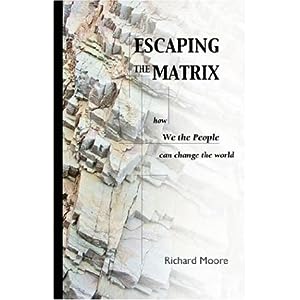 From a systems perspective I was intrigued by a certain oddity: the USA, the world’s leading power, seemed always to be bungling. American foreign and domestic policies frequently resulted in the opposite of their stated objectives. I began to notice that other, unstated objectives were being accomplished instead. These unstated objectives in many cases made perfect geopolitical and economic sense from a Machiavellian perspective—but a sense that would not be publicly defensible. Increasingly, I discounted the interpretive aspects of news reporting, and focused instead on the raw underlying events being chronicled.

I began to perceive a degree of consistency in the behavior of governments, politicians, and institutions, that was far greater than what one would sense from news reports, pundits, and official statements. The rough contours of underlying strategies and goals emerged which made seemingly chaotic phenomenon—such as US foreign policy—not only understandable but rather predictable.