I was stimulated today by three thoughts coming together.

I’ve been keen on the Alexander Technique in the last few days. Sore back, and also watching my son josh with a crippling sore back has led to a renewed interest in this approach. I’d read the book by F Matthias Alexander (Wikipedia) in the early ’80s. It got me to walk without a limp after an accident.

The aspect of the philosophy on my mind today was what they call “end-gaining” ie focusing on the goal or outcome rather than the process. Yet the method certainly has goals; reduction of pain, better performance, less stress, productivity. Like much of the method, it’s a bit paradoxical. The couple work I do with clients involves slow conscious dialogue: I say slow is fast. It is a bit similar. I use the phrase “goal shadow” to describe the negatives of being too outcome focused.

This was on my mind when I heard the phrase “holding the intention” in relationship to art. That puts the same idea in an active way, rather than not “end-gaining”, hold the intention. Intention is significantly different from goal, purpose or solution, not much but enough to give me a whole new feel, there is no sharpness in it, it is soft focus.

The third thing was reflecting on the sacred space of the therapeutic hour. How framing the work in an hour created a holding space. (Lacanians may differ). I think of that hour, the psychodrama stage, the Imago dialogue and the canvas of a painting, as alchemical vessels within which transformation can happen.

Then it occurred to me that intention far from being a wishy-washy thing could be an alchemical vessel. Holding the intention creates a space in which the intention is held, a space for the work to cook through all its stages. I like it, it complements GTD.

Later:Changed the title from vessel to crucible, and noticed how firmly this related to an earlier post. Being & Doing.

Useful item. I think there is an art and a science to checklists. Their design and their implementation.

The beauty of checklists | The Evolving Newsroom – http://evolvingnewsroom.co.nz/the-beauty-of-checklists

END_OF_DOCUMENT_TOKEN_TO_BE_REPLACED

Mutually exclusive items that between them cover all possibilities. What do you call such a list? (I had the name for them in the past, but it escapes me)
This is one for example. :
What to do with stuff

Anything delegated needs a new task: follow up xxxx with a due date.

Anything deferred needs a next action

Consider calling weekly review your “WEEKLY REFLECTION”, Ask what it all means?

I have the been scanning twitter with the #gtdsummit hashtag & it is interesting. MindManager people link to this summary, which is the on the topic I have been blogging about, but it looks best in MindManager!

Interesting how each time I see this list it is slightly different. Each new take makes more difference than it would seem. Clarify is different to process. I now call it Clarify/process/review, though as I move on I might refine that.

This map also shows the Focus area in the Making it all Work book as Responsibility.

I have a tag for AOR and AOI areas of Responsibility and Areas of Interest. I use the Focus device in Appigo To Do to show me just those Projects I want on my current list, reviewed anytime but at least weekly. 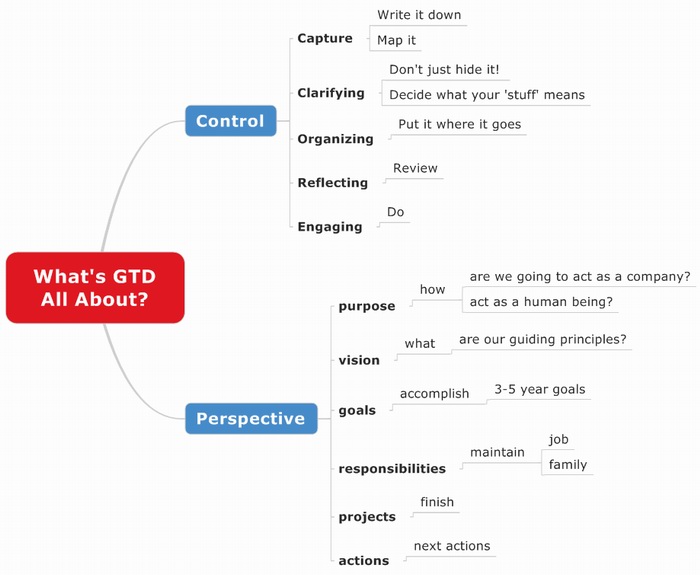 Here is a quick summary of the lecture using the new book. MIAW ( I slightly edited the quote below.)

Control is simply cooperating with reality with conscious intent

Capture: write it down
Clarifying: what does this mean to me?
Organizing: put it where it goes
Reflecting: look through the whole
Engage: Do

“You are here for a purpose. You are either on purpose or you’re not.” David Allen

These ideas are things we gave birth to! Was it Cronos who killed his children and ate them? One of the fathers of the Gods? Maybe if we followed his example we’d have more time! (Bad pun)

I like this entry in a discussion I found on this. Not only the Sometime/Maybe list either, all projects… I will see how it goes in the reviews in the next few months…

During your weekly review, you should be pruning items off of the someday/maybe list. If something no longer has the relevance it once did, or if you feel the value of completing it is outweighed by the stress of having it on a list, then deleted it; kill it; destroy it; obliterate it from your consciousness. Then feel good that you have said, “once and for all, NO. I am NOT going to do that. I don’t have the time or energy to spend another moment thinking about this thing that has no value in my life”.

Edit: If you promised someone else that you WOULD do that thing, then be sure to tell them that you no longer plan to do it. 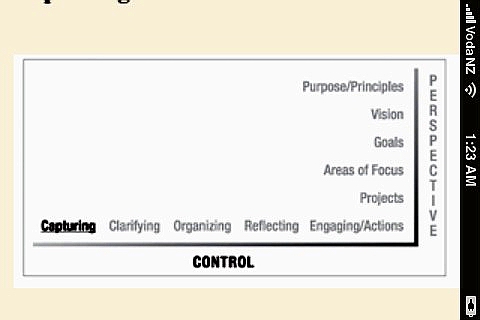 I downloaded the ebook to my phone. I’d seen a few poor reviews mainly saying it was a re-hash. It is in some ways but the simplification of the steps into two groups: Control steps & Perspective steps is elegant! Worth the price of the book IMO.

The Matrix diagram is useful, but the next one covering the 11 steps is the essence of simplicity.

As I read the book I am slightly tweaking my system as I go. It is beginning to work well for me. After several years of GTDing I have almost got a system I trust! Shifting from Palm amd the PC to iPhone has made a big difference.

David Allen suggests that there is a qualitative leap when the mind is truly freed of having to do the tasks the *systems* should do. I’m getting close.

Good review of the book here.

Here is how I am doing it right now, and loving it. Getting it all working took a while as I had to change everything with the advent of the iPhone. Everything I dreamed I could do on the Palm, in Mindmanager and on paper I now can do on the iPhone.

END_OF_DOCUMENT_TOKEN_TO_BE_REPLACED

A Beginner's Guide to Effective Email

This is a link to Kaitlin Duck Sherwood's classic and once rather useful guide. Effective Email is not a bad title.  It is, in hindsight an idealistic paper, honourable because of that but also impractical & frustrating.  There is an ideology about email embedded in the work that we now know will remain an ideal. In 2006 this 2000 document is dated.  It is dated not just because it is from the last century or because of new technology (it is somewhat technology neutral, but technology has surpassed these older ideas) but mainly because something completely new is needed

For example there is a link to a page by Kaitlin Duck Sherwood on Email Overload. Which has a range of tips, some better than others but which is flawed in its attitude to the question.  Even in its title.

There is no such thing as email overload, any more than that there is a library overload, or an art gallery overload, information overload or a shortage of time, or difficult problems… you get the idea, own the challenge, don’t be a victim to abundance in the world; be wise to the flow of stuff.

I am planning some posts here around Email Intelligence.  I want to find the central principles of wise email practices.

This is not a trivial thing, a good practitioner would be a back belt in communication, there would be personal fitness combined with a thorough tradition, and like judo would use the energy in the "enemy" as a source of strength, as a friend.  There may be a bigger topic here – the art of communication in the digital era.  I will however focus (slowly I'm afraid) on principles and practices related to email.  And in case you have not spotted, I am already indebted to David Allen's GTD tradition in my thinking here. They are good on email practice, and I also see limitations.

I recall some earlier posts on this theme.  I will go back & tag some old posts.