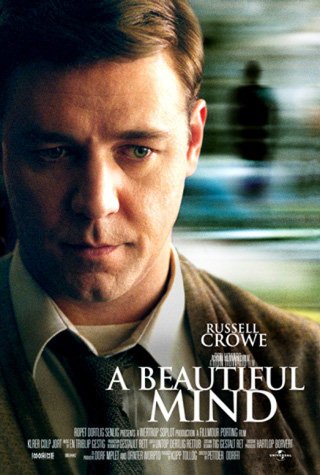 “Plot Outline: John Nash, diagnosed as paranoid-schizophrenic, goes on to win a Nobel Prize for work on game theory.”

Of course I was entertained. That said, this is the second time in a short time I have seen such a form of inner aggression in the name of a psychological solution on the screen. Fight Club was the other movie – similar in concept.

The characters in John Nash’s psyche (as shown in the movie) had little connection with his own history and dynamics. In a way his isolation in the outside world spills into his inner life and in the name of sanity he treats his inner child, except for one parting moment, not unlike his own real son – with neglect.

As a therapist I have worked with people with similar dynamics. It is almost a law of the inner world that these characters have good intentions poorly executed. Role reversal and re-education can make them effective players in the soul.

So, I found it less than satisfying that these potentially interesting and rich aspects of the psyche – the best friend, the inner child, and the great protector were all dismissed as having no value.

It is a folly to interpret the symbolic as literal. Are there hidden codes in magazines? Are they dangerous? Yes. The consumer society promoted in the magazines kills people. He was not so silly really! A case of category confusion.

On the positive side, Nash’s solution was far better than the one the psychiatric system was trying to impose. Still, I would have liked to have been his therapist!