I just ordered the book after a horrendous experience trying to log in to various dutch sites. They don’t recognise a NZ postcode, though they ask for a country, and then finally after fudging one, they tell me the don’t deliver overseas. But, I found one where they would take my money: http://www.occidentbooks.com, I hope they deliver as well! 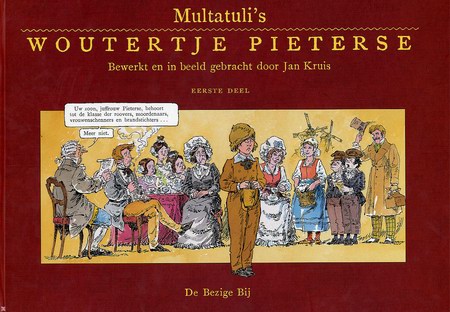 Item from an art show follows, the first two paragraphs translate the dutch ones in the earlier post.

Woutertje Pieterse is about the open, highly imaginative boy named Woutertje who grows up in 19th-century middle-class Amsterdam. He is not understood by the people around him who are convinced that he will not amount to anything. When he reads about the bandit chief Glorioso and schoolmaster Pennewip assigns him to write a poem, he draws inspiration to write his own Bandit’s Ballad. Its content shocks his family and friends.

With vividly portrayed events and personalities Multatuli offers a subtle satirical portrait of a narrow-minded 19th-century bourgeoisie reminiscent of the work of his English contemporary Charles Dickens.

Multatuli and Woutertje Pieterse
Multatuli (pseudonym of Eduard Douwes Dekker, 1820-1887) was famous in his day as the author of Max Havelaar (1860). In this novel he described the abuses he had encountered as a civil servant in the Dutch East Indies. Its success persuaded him to become a professional writer in the hope of promoting social change.