Brothers Karamazov is now in an audiobook! This mammoth task has been completed, thanks many readers and Rainer.

I read this book in 1967, at the Cragieburn ski-field where I was a custodian. I was upstairs in the sleeping loft of the ski hut, and often there would be a loud party downstairs. I’d read it by candle light or with a torch. I made notes! I may still have them. It was part of a few years of delightful self education, prior to going to the University of Canterbury, which by comparison was like a padded cell of the mind, though I have no regrets. I am looking forward to hearing the book read to me. 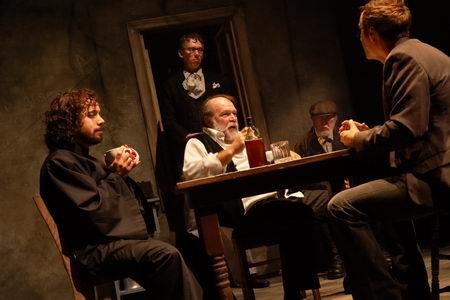 Links follow to the download page, Librivox, notes on a stage production where I found the image, and Wikipedia – where there is an excellent summary of the characters & their various names!

The Brothers Karamazov by Fyodor Dostoyevsky (1821-1881) Translated by Constance Garnett (1861-1946) The Brothers Karamazov (Russian: Братья Карамазовы) is the final novel by the Russian author Fyodor Dostoevsky, and is generally considered the culmination of his life’s work. The book portrays a parricide in which each of a murdered man’s sons share a varying degree of complicity. The Brothers Karamazov is a passionate philosophical novel that explores deep into the ethical debates of God, free will, and morality. It is a spiritual drama of moral struggles concerning faith, doubt, reason, and modern Russia. Since its publication, it has been acclaimed all over the world by thinkers as diverse as Sigmund Freud, Albert Einstein, and Pope Benedict XVI as one of the supreme achievements in literature. (Summary by Wikipedia)

And Karamazov Makes Two (Years) By cataloging The Brothers Karamazov, LibriVox has now made two full years of free public domain audiobooks available to the world. That is, if you started listening to our catalog today, and listened 24 hours a day, it would take you two years to get through our catalog. By which time, I hope, we’ll have another two years for you to listen to.

“Animals could never be so artistically cruel as man,” Ivan, one of the brothers K, offers to his religious brother as what will eventually serve as evidence for God’s non-existence—and is something of a hypothesis for Dostoyevsky’s novel. What’s so admirable about this Lookingglass production is that, moment to moment, it rises to the level of artistry needed to sustain an epic-length and predominantly verbal exploration of such cruelty—and its antidote. The story, of course, is a heavy, dark and unflinching look at the terrible things people do to each other, with a patricide-murder-mystery plot providing a trial that damns everyone for being guilty for everyone else. Cleverly, director Heidi Stillman doesn’t try to counteract the verbosity and constant philosophizing, but instead works somewhat subordinate to the text, and in so doing creates a punk-stylized, sexy production with a fluid set that acts like a set of illustrations for the narrative, and keeps up with the play’s fever pitch. The acting sometimes borders on the frenzied or melodramatic for longer than is comfortable—but hey, that’s what Russian literature seems to do best. (Monica Westin)

The father, Fyodor Pavlovich, is a 55-year-old “sponger” and buffoon who had sired three sons during the course of his two marriages. He is also rumored to have fathered an illegitimate son, Pavel Smerdyakov whom he employed as his servant. Fyodor took no interest in any of his sons. As a result, they were all raised apart from each other and their father. The murder of Fyodor and the ensuing implication of his oldest son provides much of the plot in the novel.
[edit] Dmitri Fyodorovich Karamazov

Dmitri (Mitya, Mitka, Mitenka, Mitri) is 28 years old, Fyodor’s eldest son and the only offspring of his first marriage. Dmitri is a sensualist much like his father, and the two men’s personalities often clash. Dmitri spends large amounts of money on debauchery-filled nights with plenty of champagne, women, and whatever entertainment and stimulation money can buy, soon exhausting any source of cash he comes across. This leads to further conflict with his father, who he believes is withholding his rightful inheritance, and his lack of money will cast suspicion upon him in the murder investigation. He finally comes to the brink of murdering his father when they begin fighting over the same woman, Grushenka. He is close to Alyosha, referring to him as his “cherub”.